Born in Lecco in 1962, he is one of the greatest Italian Chefs in the world. Graduating in 1977 from the Hotel Institute of Bellagio, like any great story that respects, it all begins from the most humble work, respecting the roles and always with a great desire to learn.
He has completed a valuable training course in the Grandi Hotels and in some “Tristellati” Restaurants in Europe.

At only 26 years old, after many experiences abroad, comes the opportunity of life: after a long tradition French and English, he becomes the Personal Chef of the Royal English House,first chef and still only Italian.

In 1991 he flew overseas and became Chef at the White House,one of the most popular and important symbols of all the United States of America with George W. Bush senior. It will be two intense years that will bring him to know the essence of the “star and stripe state”.

The delivery of the First Michelin Star, received in Florence in October 1994, in addition to being an indelible memory is valued even more at the time of the proclamation: the master and dear friend Paul Bocuse handed over the coveted prize.

Its success then found the Italian way in the creation and opening of the Terrace of The Eden of Rome, where he remained for nine years, conquering Michelin stars and multiple other awards and awards, creating a winning school and concept, then moving on to the prestigious Palace Hotel in St. Moritz that sees him Executive Chef for three years.

Seven times he was named one of the top ten chefs in the world in the “Five Star Diamond Award as one of the World’s Best Chefs”.

Over the next nine years he embarked on a prestigious journey in Japan:with his group he opened and managed more than 30 Italian restaurants, including theArmani Ginza Tower in Tokyo and theEnrico Workshop,icon of “Made in Italy” abroad.

He then successfully embarks on the road that leads to the openings of new Armani restaurants around the world.

November 16, 2008: It receives the prestigious International Award “Tartufo d’Oro di Asti” as a recognition in the diffusion of Italian cuisine and culture around the world.

In 2009 at the Merano wine festival he was appointed Ambassador of Italian Cuisine in the World.

At Vinitaly 2011 he received the prestigious “Outclass” award.

In 2012 he was elected President of Euro Toques Italia, founded internationally in 1986 by French chef Paul Bocuse along with his friend and colleague Pierre Romeyer and rooted in Italy thanks to Gualtiero Marchesi.

His career has led him to interpret his cooking in the most important events in the world. He cooked in the official opening ceremonies of the 2008 Beijing and London 2012 Olympics representing our country, as well as two G8s and the G20.

He has also signed and curated some of the most exclusive and famous weddings on the planet. In 2013 in Pisa he received the prestigious Piazza de Chavoli International Prize.

2 June 2014 is appointed by Ministerial Decree of the President of the Italian Republic Napolitano countersigned by Prime Minister Matteo Renzi:

Since February 2014 he has been Vice President of Operations of EURO TOQUES INTERNATIONAL with delegation for Expo Milano 2015.

In January 2015, he was unanimously elected PRESIDENT EURO TOQUES of INTERNATIONAL.

In December 2015 he received the international award “Doc Italy, Journey Through Excellence”.

In February 2016 he began an ambitious new project in Taiwan that led him, in a short time, to create different catering facilities at various levels and a new concept of import and distribution of exclusively Italian products and wines.

In December 2016 he was appointed Testimonial and City Ambassador in the CULT CITY project in Lombardy for the year of tourism 2017.

In June 2017 at Castadiva Resort, where he is a consultant to the F&B department, he was re-elected President of Euro Toques International.

In 2020, a prestigious project is about to begin in China. 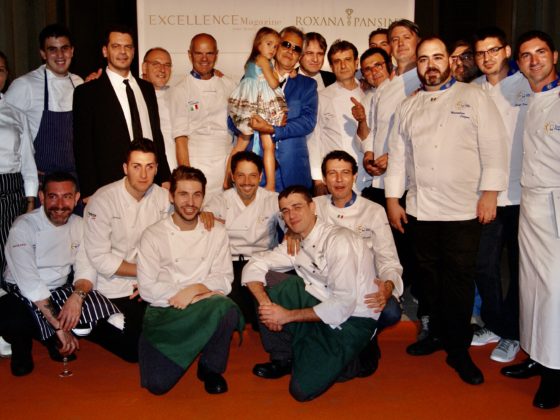